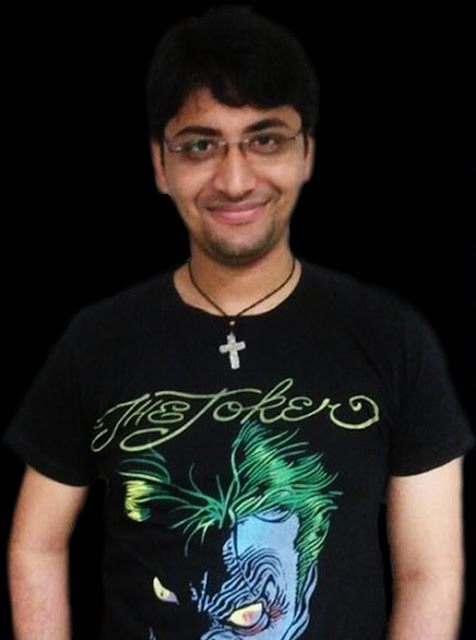 Subhasis Das (Call me Subho) was born and brought up in a small town- Rasayani, on the outskirts of Navi Mumbai but ask him about it, he will beam and say he is a proud Mumbaikar and if ever happened to doubt that then God help you. He is the lone child of his parents and smugly flaunts that he is pampered and over-cared. He is not a spoilt brat though but he has tough times with his tie.


Like every Indian parents, his Mom dreamt him to be the next Tendulkar while his dad always wanted him to be an engineer. However, his cricketing career was derailed once the big guy from his class shattered his front teeth with a bouncer. He was so scared of that guy that he took refugee under his books and that's when he allowed his biggest enemy an entry in his life ↔ Mathematics. He though claims he was actually good in Maths until they mixed the alphabets in it.

Till the time, he realized that he wasn't Einstein, it was already late. He was in high school and had never talked to a girl in his life. Teacher's pet, Nerd, Dummy, Geek, Champu and even Asshole, sometimes; he had grown hearing them to all.
High school brought a new chapter in his life; he finally made friends- the rowdy back benchers. A rebel was born and was finding his ways out. Life just went feral after that. His teen years were all about discovering new adventures every day. He declared Physics was more venomous than Mathematics which truly reflected on his mark-sheet. His punishment was a four exile from the comforts of home to a 10 X 10 hostel room shared by three. Yes! He was in engineering. He though felt that was like the best thing ever happened to his life. Really, college is the best time of your life when else your parents going to spend so much money a year just for you to go to a strange town, get drunk every night and take one night stands. And it happened that way, He always felt that he was born smart and education was just ruining him.

His attendance was always in single digit. He punched his seniors, threatened his teachers, ragged the juniors, teased girls and planted a little bomb which he claims was his third year project in the library, for all these he deserved to be jailed but just got escaped for his innocent face.

However, he was tamed shortly by his college management with the deadly weapon called term work. He now faced the real and ugly side of engineering- assignments, projects, labs, tests and Maths. When he was finally out of his college, he had lost over ten kilos, he was some seven shades darker, his hair and beard had grown like an ape and he couldn't open his eyes in light but at least he was able to recognize his parents.

He was an ENGINEER now!

Two months of rehabilitation in Goa and power yoga, he was normal again. Thanks to the novel thing and the third year project boldly highlighted in his resume, he got a job in a leading telecom company. They thought he was innovative. Few years from there, he is sitting on a comfortable spinning chair in his cubicle, playing with the mouse; thinking- 'Is this really what he wanted to do in his life?'